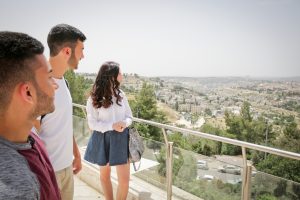 Israel and the Middle East are constantly at the center of world attention. The area’s geopolitical significance, regional conflicts that affect global stability, and the hopes and fears emanating from the “Arab Spring” and the recent rise of ISIS all contribute to widespread interest in this field of study. RIS provides an interdisciplinary approach to this exciting area of study, combining courses from relevant fields such as religious studies, history, conflict studies, international relations, political systems, sociology, anthropology, geography, Hebrew, and Arabic.

As a student of Hebrew University’s Rothberg International School (RIS), you will have the opportunity to study with leading scholars while living in Jerusalem, one of the most important and dynamic cities in the Middle East. Your studies will include field trips and meetings with expert practitioners. In some programs, you will be encouraged to intern with one of a number of organizations or research institutes. Learn more about our programs below.

All courses are open to both undergraduate and graduate students:

Provided as examples only and subject to change:

As an undergraduate student, you can choose to tailor your courses to suit your academic interests, selecting from among RIS courses and English-taught courses in other HebrewU faculties, such as in the humanities, social sciences, and law.

As a graduate student from another institution studying abroad with us, you can also choose to tailor your courses to suit your academic interests in a study abroad program or as a visiting research student, selecting from among RIS courses and English-taught courses in other HebrewU faculties, such as in the humanities, social sciences, and law.