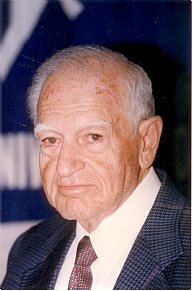 Samuel Rothberg (1910-2007), a key architect of the American Jewish community’s relationship with Israel, was both a philanthropist and a business leader.

Born in the Ukraine in 1910, Rothberg and his parents immigrated to the United States in 1912 and settled in Philadelphia, Pennsylvania. Prevented from studying medicine by college quotas on Jewish students – “These were the realities and you took them in your stride,” he later said – he majored in bacteriology and microbiology at the Philadelphia College of Pharmacy.

Rothberg married Jean Culver in 1941, and the couple moved to Peoria, Illinois, where they raised their four children — Heidi, Kathy, Michael, and Patrick. Initially employed as a senior researcher for the American Distilling Company, Rothberg moved into management, where his exceptional skills in sales and marketing propelled him to become a leader of the industry.

Rothberg also took a deep interest in the unique circumstances and concerns of Jewish people around the world. In a speech at Hebrew University, he said: “Ever since 1943, when we first learned of the mass killing of Jews by Hitler’s Nazis, I have been deeply concerned with all aspects of the future of the Jewish people. This has been the driving force in my activities on behalf of the Jewish people and the State of Israel.”

Commitment to The Hebrew University of Jerusalem

For Rothberg, Hebrew University was a central meeting point where Israel could nurture excellent students from all backgrounds, foster fruitful academic exchange with outstanding young scholars, and engage in world-class research. Rothberg won friends in Israel and throughout the world with his unwavering loyalty and love. In 1968, he was elected chairman of the Board of Governors of Hebrew University, a position which he held until 1981. Rothberg played a key role in returning the university to its historic location on Mount Scopus and in the establishment of new academic units – including the Harry S. Truman Research Center for the Advancement of Peace and the Hubert H. Humphrey Center for Cancer Research and Experimental Medicine. Of particular importance to Rothberg was the creation of the School for Overseas Students, now known as HebrewU’s Rothberg International School (RIS).

Continued Leadership by the Rothberg Family

Rothberg’s wife, Jean, and their children supported him in his leadership role, and the family remains committed to continuing his work. In later years, when his health deteriorated, Rothberg asked his daughter Heidi to continue in his place in the university leadership.

Heidi Rothberg is a prominent lay leader in the United States whose active commitment to philanthropy extends her parents’ legacy. She lives in Colorado and currently serves as a governor of Hebrew University and a co-chairperson of the International Board of Overseers at RIS. Heidi is also a former trustee of the Harry S. Truman Research Institute for the Advancement of Peace. In June 2008, she received an honorary doctorate from Hebrew University. In addition to supporting the university for over 30 years, she sponsors other worthy causes in Israel.

Kathy Rothberg Barnett is a member of Hebrew University’s Board of Governors. She received an honorary fellowship in June 2009. Kathy lives in Illinois with her husband, Brian Barnett, and is an active philanthropic community leader who continues to foster the Rothberg family’s exceptional legacy of support and friendship for the State of Israel and Hebrew University.