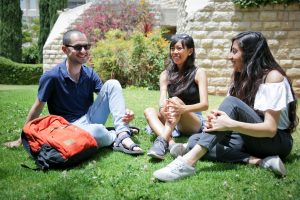 At Hebrew University’s Rothberg International School (RIS), we believe that language is the key to understanding a civilization and its society. We are top providers of instruction in Modern Hebrew, Modern Standard Arabic, Literary Arabic, Colloquial Arabic, and Biblical Hebrew and other ancient languages of the Biblical world.

RIS is world-renowned as a pioneer in the teaching of Modern Hebrew through the use of ulpanim (intensive language study programs). The techniques and methods developed here allow you to obtain a high level of language proficiency in a relatively short amount of time. After completing our Modern Hebrew ulpan levels, you will be able to follow Israeli news media and read academic articles in Hebrew.

Hebrew University houses one of the top Literary Arabic (Fusha) departments in the world. You can study Literary Arabic and Modern Standard Arabic (MSA) intensively from the beginner to the advanced level. Colloquial Arabic is offered to undergraduate students.

We also offer courses to graduate students in ancient languages of the Biblical world. Biblical Hebrew, Akkadian, and Greek are offered each year, while Aramaic, Ugaritic, and Hittite are offered every few years.
Click here to learn more about language studies at Rothberg.