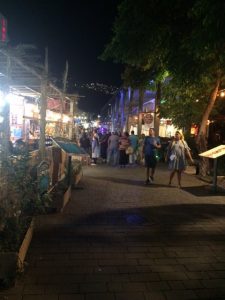 Last year, I came to Israel for six weeks to take part in an ulpan in Jerusalem. At fifteen, six weeks away from home seemed like a long time, and Jerusalem seemed overwhelmingly huge. However, coming back this summer, I began to realize that I had only scratched the surface before. There is so much to see, feel, and explore in Israel. Last week, my friend and I decided to go to Tiberias for a night. With almost no planning, we packed our backpacks, charged our Rav-Kavs (public transportation cards), and hopped on a bus. Three hours later, we were driving around the Kinneret and down to the city center.

In the States, everything must be carefully thought out and planned. Things like hopping on a bus on a whim just don’t happen. Nobody respectable would even consider getting a hitch from a stranger. When I left the States, many people questioned my decision and reminded me of the constant threat of terrorism in Israel. My response was that I actually felt safer in Israel than in the States. I would never have felt safe getting on a bus to a city I’d never been to in the US. While obviously bad things do happen here, there is also a sense of a safety net that Jews hold for each other. In the American “melting pot” you can’t just ask a random person for help and expect to receive it.

One of my favorite things about being in Israel is its readiness to welcome outsiders. In many places in the US, tourists (and immigrants) are looked upon as being in the way; in Israel it is the opposite. Israel is designed to accept immigrants, and a large percentage of its GDP (Gross Domestic Product) comes from tourist revenue. Most people are willing to speak Hebrew with me in stores or on the streets. As a prospective Olah (international Jewish immigrant to Israel), I am offered advice, congratulated, and questioned. While the balagan (chaos) can be frustrating sometimes, it also creates a flexible and open society that is refreshing to me, as I’m coming from the reserve situation in the US.

This “safety net” and the openness of the culture makes me feel safer traveling here than I would in the US. There is so much to be explored in Israel; however, were Israel like the States, it would probably go largely unexplored (by me at least). Traveling is always an adventure, and in Israel doubly so, but if the balagan is doubled, so is the willingness to help two girls alone on a bus to Tiberias.