One of the most valuable experiences I had in Jerusalem was actually an assignment from my Issues in Israeli Society teacher.  The assignment was to go into Mea Shearim, the ultra-Orthodox neighborhood in Jerusalem, and buy a religious newspaper (extra points for bringing back a rare or extremely-religious paper).  When I came to Israel, I fully expected that Mea Shearim was one of the places I would never enter.  Why would I need to go there? Not only am I a secular Jew from the United States, but I would have stuck out like a sore thumb walking into there.  Nevertheless, Professor Kaplan gave me a reason to go.  Having never walked into an ultra-Orthodox neighborhood before and knowing only a little more than one semester of Hebrew language, I recruited my roommate from New York to go with me to get the newspaper.

However, there were no newsstands to be found.  My friend bought a coke, and we bought a garbage can for our apartment because there were so many stores with cheap items in Mea Shearim.  Along the way, we asked every store-owner where we could find a religious newspaper.  Each one had the same answer, “Just keep walking down a little further that way and go left.”  I really thought at some point that they were all just collaborating to send these naïve Americans on a scavenger hunt.  Finally, after walking just a little further and turning left into another store, we found three newspapers behind the counter.  Success!  We owe a great debt of gratitude to the grocery store cashier, bookstore man, and several random neighbors in the community for helping us make that final turn into the right store. 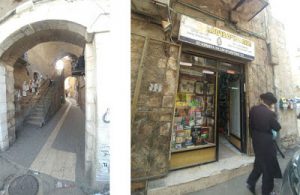 On the way back to school with two newspapers, a trash can, and bellies full from a home cooked meal at a Kosher meat restaurant, we were convinced that we were probably the only two people from our class who found newspapers in Mea Sharim.  After all, we had spent a good two hours walking around trying to find them.  We were going to be heroes, walking in with our four-days-late newspapers that seemed absolutely impossible to find.  When Professor Kaplan asked to see the papers, though, we were a little surprised when everyone held up the same two types of newspapers that my friend and I had bought.  Turns out, everyone else managed to find a newspaper in Mea Shearim despite the apparent lack of availability.

The point of the assignment was to learn about the ultra-Orthodox population of Israel so that we could discuss issues in their society and between their population and others in Israel.  While I learned about the ultra-Orthodox in class following our excursion into their neighborhood, the newspaper hunt was more about exploring a part of Israel that I never thought I would enter.  It was uncomfortable at first not knowing what we were getting into, but as we walked around, it became easier to just take it in.  It was one of the first times since the beginning of my program that I really felt like I got out of my comfort zone, and it became one of my most memorable experiences.

As I write this, I am snuggled up in my bed at the student village, sipping on hot tea with cough drops and a thermometer by my bedside. Unlike my previous, maybe slightly naïve misconception that it is simply impossible to get sick during your semester abroad, I am currently learning that unfortunately, that is not true. However, what are the two things that you want when you get sick? The first is obvious: chicken soup. Thankfully, the chicken soup supply is plentiful here, so no problem with that. The second is also pretty obvious: Home. This might seem problematic at first, as how can any other place truly compare to the one you grew up in? After 2 ½ months of studying abroad in Jerusalem, Israel at the Rothberg International School through Hebrew University, I am here to tell you with confidence, even in my germ-y state, that you can 100% fulfill the second criteria, because being a student at the Rothberg International School makes you feel at home.