A few weeks after I arrived in Israel, I began meeting with Professor Gad Yair as part of his research study exploring cultural differences between Israelis and Americans. Professor Yair is a former academic director of the Rothberg International School’s (RIS) graduate programs and the current director of the Research Center for Innovation and Education at Hebrew University.

My numerous conversations with Professor Yair helped assuage the anxieties I felt about standing out and being different when I first moved to Israel. Most importantly, our discussions enabled me to understand that cultural differences between Israelis and Americans – and the impact those differences have on individuals – are real.

This may seem obvious. At first, I thought it was. I’ve studied Israel and the greater Middle East region for many years. Even before I moved, I knew – in an intellectual sense and on a theoretical level – that cultural differences between Israelis and Americans exist. However, after I arrived in Israel, I learned quickly that knowing about cultural differences does not equate to living, working, and learning within the milieu of those differences. In short, knowing and experiencing are distinct and often divergent phenomena.

To be clear, I do not believe that relationships between Israelis and Americans are defined by difference. In fact, a shared sense of humanity characterized by friendship, compassion, humor, and hospitality has allowed me to gain a strong foothold in Israel and provided me with the courage to take the first steps of my new journey at RIS.

RIS has given me the unique opportunity to live, work, and learn in a diverse community composed of – and colored by – both cultural differences and cultural similarities. Through my collaborations with Professor Yair and other faculty members at RIS and HebrewU, I’ve learned to identify, name, navigate, appreciate, and grow from my everyday encounters with cultural norms – whether they are different or similar to those with which I am familiar as an American. 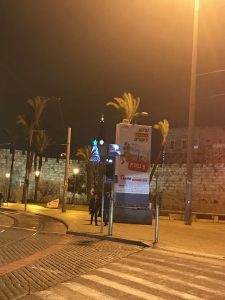 To conclude this post, here are some of my favorite things about Jerusalem: