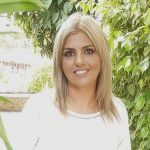 Professor Amal Al Nagammy is a lecturer of written and conversational Arabic at Hebrew University’s Rothberg International School (RIS). She is also a respected international speaker and educator in Arab women’s rights and empowerment as a gendered approach to peacebuilding and conflict resolution, and is an active United Nations committee member for Women, Peace, and Security. A native speaker of both Arabic and Hebrew who is also fluent in English, Nagammy has degrees in both Education and Social Work.