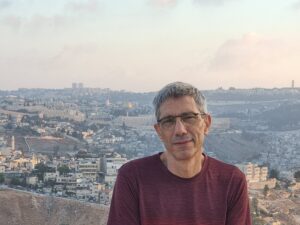 Oron Shagrir is a professor of philosophy at the Hebrew University of Jerusalem, in addition to serving as the university’s Vice President for International Affairs and the Provost of the Rothberg International School.

Shagrir’s main areas of research are the philosophy of computing and the conceptual foundations of computational sciences, including computer science and the cognitive and brain sciences. In his latest book, The Nature of Physical Computation (Oxford University Press), Shagrir asks why systems such as laptops, smartphones, and nervous systems are deemed to compute, while it seldom occurs to us to describe stomachs, hurricanes, rocks or chairs as computing systems. His answer is that computation is essentially semantic, namely, that it always involves representations.

In his recent research project, Shagrir studies a phenomenon known as the indeterminacy of computation – the fact that some physical systems simultaneously implement different formal structures. Shagrir works on this project with several researchers, including Jack Copeland, Nir Fresco, Jens Harbecke, and Filippos Papagiannopoulos.

Shagrir has published numerous papers on supervenience, multiple realization, cognitive representations, hypercomputation, computational explanations, and the history of computability. He is the editor (together with Jack Copeland and Carl Posy) of Computability: Turing, Gödel, Church, and Beyond (MIT Press).

After completing a BSc in mathematics and computer science and an MA in the history and philosophy of science at Hebrew University, Shagrir earned a PhD in philosophy and cognitive sciences from the University of California, San Diego. He returned to Hebrew University for his postdoc in 1995 and soon after joined the university’s faculty.